On Tuesday Himself posted the poem “Foxes”. I had asked him to write a children’s story for me so I could illuminate it. I should’ve known better, he adores the original Brothers Grimm stories. Still, this poem was rather cheery so I went ahead with the project.

My fox. His eyes look weird.

A house! A mouse! Quick, what do you think the fox said? 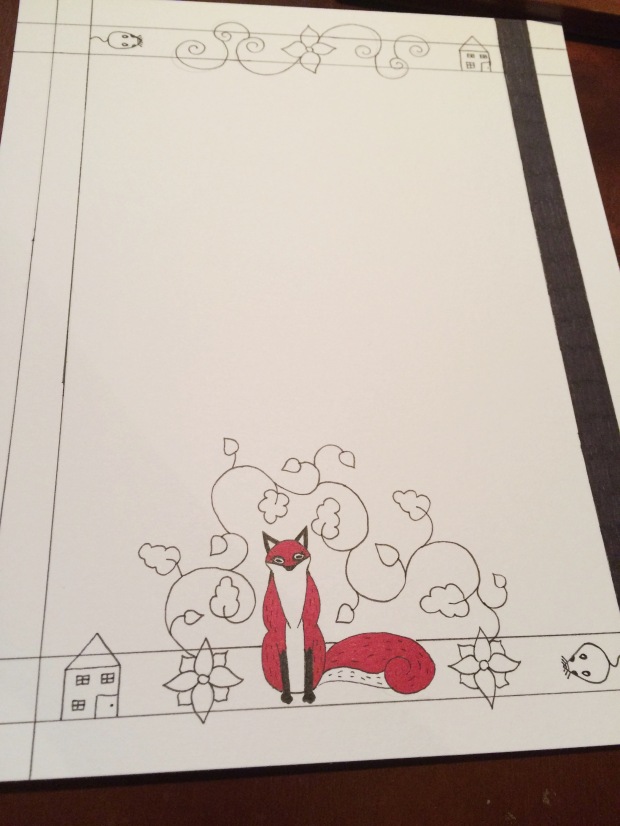 Adding the greenery. His eyes are following me.

Border almost done, most of the greenery done.

I wasn’t sure about adding the pink but I lurves it. I changed the eyes on my fox slightly and I think it helped.

Tada! I thought about adding some doodle elements but decided it would just detract from the piece.

Art Supplies used: these Micron pens*and then these sharpies*, which I’ve mentioned before. Maybe every post. Not a lot;) Right now I utilize Strathmore Mixed Media* paper for just about everything.

So this isn’t going into the etsy shop; we’re actually thinking of illuminating several of his poems and then making it into a book (squee!). I’m not sure when I’ll be able to illuminate another one, I have quite a few projects I’m juggling. In the meantime, enjoy the new Poetry page.

*So I signed up for the Amazon Affiliate thing to see how it works since every blog I follow participates. I’ll only link to stuff I’ve actually used or want to use.