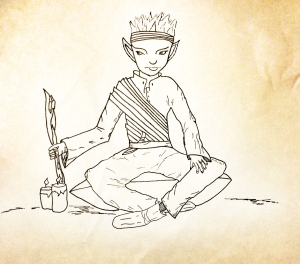 Blood streamed down T’kk’tck’s face.  The whip snapped out again spiraling painfully around his neck, cutting off his lungs.  His heart slowed, a weak thump.  For a moment her cry of defeat echoed in his mind.  For only a moment.

The fury, shame and despair returned and the beat in his chest sharpened.  He clawed at the whip, its razor sharp tongs slicing his hands.  The guard jerked it back digging the blades into his throat.  he sky wavered.  In an odd moment he thought he saw a fish fly through a cloud.

Screaming wildly with no air, he swung his arm around over and back under the whip.  Pulling his arm in with both arms he dropped his weight and the whip slid out of the guard’s hands.  As the slack loosened, air gushed freely into his lungs.  Ragged breaths shook him as he pushed up to his feet again.  The guard was pulling a sword free with a scowl.

The magic soared inside him and glowing blue gears formed around T’kk’tck’s head.  As they appeared they aligned and started slight chiming adjustments.  A glowing blue line formed and a single heavy chime resonated.

The blue line separated the guard’s head, and in the same instant split out into multiple other threads hitting guard after guard as it bounced down the hall.

A piercing explosion of pain shot through T’kk’tck’s mind and he lost vision in his left eye.  Something flopped against his cheek.

No time.  Where is she?  Where are they?

He shoved a hand out and steadied himself.  The guards had come from down stairs.  A broken wing with clockwork gears lay tied to one guard’s belt.  With a snarl, T’kk’tck stumbled over and tore it from the corpse.

Taking it in his left hand he snapped free a feather with his right.  Holding it by the base he stared down the winding darkened stairway.

After a few flights he saw two guards at a torch lit door on the landing below him.  Silently, T’kk’tck slid over the railing and dropped on them.  The first guard never saw him.  Sixty five pounds of rage, pain, and despairing gnome landed on him.  The feather went through one eye, and the guard fell.  The second started to scream before a spell pinned him to the wall and ended his life.

T’kk’tck lay on top of the dead guard shaking his head for a moment.

Concentration weakening he crawled to the guard on the wall and pulled a key chain free.  Shaking hands betrayed him and dropped the key two or three times before he found one that worked.  The door creaked open and a long hallway of torches yawned out before him.

Above he could hear voices, reinforcements for the dead he’d left behind.

“Fffjar!  Fffjar!  Released and revived.  Take your cost in their lives.”

Flame wreathed eyes appeared in the space at the end of the stairs.  Blackened smoke drifted down into the shape of a monkey.  A gaping maw of fire snarled wordless obscenities at him.

Turning away as the monster bounded up the stairs, T’kk’tck started down the hallway.  Hands and shouts from the cells deafened him and he could barely limp.  One foot after another he stumbled onwards.

What could have happened to her?

The limps turned into a forceful walk, the walk into a jog, the jog into a run.  Bloody footprints traced a trail down the hall and around the corner.

A single door, slightly ajar was in front of him.  A muttered spell ended the guard there, his readied crossbow fired and something tugged at T’kk’tck’s leg.  A cry inside the room arrested his impulse to check and he shoved the door all the way open.

As he stepped into the room he saw the guard end his punch into her gut.  Blood spurted at the corner of her mouth.  The guard turned in surprise and she just stared at him; a mass of bruises and small cuts.  T’kk’tck glanced at the knives on the table next to her and the world went red.

“Law of my heart, soul of the world, render this balance, justice observed.”

As he recited the ritual words, the guard started towards him startled.  Time had already started to slow though and the threat was too far away to stop T’kk’tck’s chant.  Tearing the bolt from his thigh, he bathed in momentarily in the bright gushing blood and then sank to his knees.  Methodically drawing the runes in a circle.

Flame from the torches stopped flickering, below him a golden gear appeared, the rest of the room stood in stark darkness.  A golden light pouring of the sky.

“Child of small plants, why have you called?  I am too heavy for you.”

“Weigh my heart, weigh my debt.  I will buy her life.  I will bring Justice into this world, Judgement and Scales.”

“You would buy this child of chaos?”

“Are you sure of the price?”

He felt the gaze turn again from her to him.  And then finally back to him.  As best he could from his frozen position he squared his shoulders, keeping his gaze locked on her eyes.

As the words finished the moment ended and time, held off by the spell poured back in with a vengeance.  The guard’s movements sped up but were suddenly arrested as golden gears tore the walls apart.  The castle roared as it was torn into a thousand pieces.  Rubble shattered down around them.  Bright light of noon poured into the space where the ceiling had been.  Prisoners fell right and left.  Some miraculously staying alive, others falling screaming to their deaths.

Kelpy’s eyes stared wide at him.  Her bonds fell free, and she bounded over with that unstoppable energy that only she could summon.

As she reached him she dove into a hug calling his name out over and over.  Then, she paused, and planted her head against his chest.

He put his hand over his left breast and felt the quiet clicking rythym.

“There was a price.  Rules for everything.  I followed them.  But don’t worry.  I promise you, my heart still beats.  Just only for you now.  Like clockwork.  Dependable.”

The smile was more than worth the pain.  He put his hand on hers and closed his eyes.

More than worth it.

So this is a great deal after the other scenes I’ve shared recently.  I’m not sure if it’s part of this story or not.  But it definitely needed to come out and gives a glimpse into a possible future for the two of them.  Inspired by Emeli Sande.   – Yerrik